A forum for Cat Tails while it is down for remodeling!

What's going on in your life?

What's going on in your life?

Everyone is busy right now with something. I know the end of the year has been busy for me.

So what's new? I'm engaged to my boyfriend (8 years as of this past Oct). On our 7.5 year annv he popped the question - June 26. What is really bad was I totally ruined it too. He only managed to say "Will you. . . " then I looked at the ring and said "are you freaking kidding me?!" You have to understand he's been talking about getting married since 2004. It was pretty horrible but funny. My wedding is July 30th. I ordered my wedding dress on Black Friday or November 26. So I'm busy trying to plan a wedding, don't think it's going too well tho.

Seeing as I'm finally engaged, I have started moving stuff to his house - which is about 20 minutes away from my parent's house. I've been trying to pack up stuff but it's kind of hard seeing as I'm not "allowed" to move in until July. . . After the wedding. So really, what do you pack up when you're not really moving for 7 months?

I found out I'm going to be an Aunt in Sept. My sister is due in March with her first baby, so yay between my wedding and my sister's baby coming in three months - it's getting a little busy over here. My mom has two boxes marked "Baby" and "Wedding". I told her the other night thank GOSH it's for TWO different people.

We're hoping to have her baby shower next month and haven't started planning that much. My sister is also my Matron of Honor too. I also asked my two soon-to-be sister-in-laws to be in the wedding as well. The one was also pregnant when I asked her. She just had her baby Dec 7 - Kora Autumn.

My beautiful cat, Spot, has passed away on Sept 26 (which is my boyfriend's mom's birthday so this day will probably kill me forever). She was my longest ever pet and healthest pet we have ever had. I got her when I was 9 years old. So she was 16.5 when she passed away. I was the last person to see her alive. Within 30 minutes of me leaving for work, she passed away. My dad was the one that found her. I knew she was getting bad. I didn't want to go to work but I think I was still on probation from calling in (the month before) so I had to go. It's seriously been a wild ride of emotions. One minute I'm doing okay and the next minute I break down. I had her more than half my life.

And of course being me, I deal with the loss of a pet differently each time (I guess). When our Sheltie died in 08 (at only 4 years old due to poor breeding), I threw myself at my Border Collie who was 7 months old at the time. That actually caused problems - separation anxiety, Belle (my Border Collie) and I both have it as noted by everyone (including the boyfriend's mom).

When Spot passed away, I actually put distance between Belle and myself (at least tried). I ended up spoiling my only cat, Emma. I got her 4 new toys and a hammock. She's also been really close to me since Spot has been gone. Always in my room, etc. I also got Belle a few new toys too - for the boyfriend's house.

Sorry, didn't think this was going to be so long.

Currently I'm at my best friend's house because my mom doesn't want me at home alone at night.
Family troubles with a certain -insert string of profanities here- father of mine means it isn't exactly safe to be home alone anymore.
I need to find a job too. Financially my mom and I are in a bind. Ugh, things don't look too good.

On a happier note, my nephew is celebrating his first christmas this year! My mom and I are going over to visit my brother and say hi.
And of course, to spoil the first grandkid/first nephew like crazy. Josh is 6 months old. X3

We also made cookies the other night. I want to eat them. Seriously, I know I shouldn't, but the bags of deliciousness just taunt me.
I don't know if they will make it to christmas XD

We're going tree shopping this weekend too. Anyone else buy a real tree every year?
no wonder we're broke X3 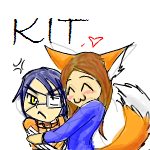 My mom made christmas cookies too - I wanted to eat one but she took them all to work with her. I doubt she'll make any for Christmas seeing as it's so close, but you never know.

We are supposed to get a real tree this year, however, we still haven't gotten one. We were planning on going tree shopping on Sunday, but we got nailed with 5 inches of snow, freezing rain under that snow, and wicked winds. I actually didn't leave the house from (last) Saturday until Wednesday due to road conditions. I mean, seriously, where are the salt trucks? Plow trucks? I actually called into work on Sunday - due to being sick and of course the snow made the decision even easier.

Emma using her hammock. That was when I first got it so she was still like. . . uhhhhh what's this? But now she loves it. I turn around in my computer chair and see her using it all the time.

YOUR CAT. SO CUTE.
Seriously, I want to steal her. She's downright adorable.

Hmm... this will be my first christmas without my cat. Well, guess that goes on the list of things that make this season depressing.

That's my Emma for ya. She's a cutie and I'm glad to have her.

This is my first Christmas in 16 years without Spot so yea, I know what you mean. :'(

We FINALLY got our Christmas tree yesterday.